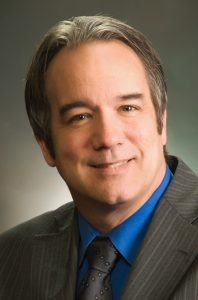 The award recognizes long-time meritorious service to the Chamber of Commerce movement in Canada, providing leadership and mentorship to the benefit of the Chamber, the business and general community, and the Chamber profession.

The award presentation included the following:

The tagline of this year’s conference is “Come Together, Right Now.” It was chosen to reflect that it’s been three long years since we’ve been able to “come together,” but it’s also to pay homage to the passing of CCEC’s 2017-18 President, John Hopkins, a leader and long-time friend to many within CCEC. Those of us who were lucky enough to know John will recall his passion for the power of the “coming together” of the chamber network and also his passion for the Beatles!

We have over 50 people attending the conference for the first time, so not all of you will know John. He was the CEO of the Regina Chamber of Commerce from 2001 until his passing earlier this year after a courageous battle with Stage 4 prostate cancer.

John was not your conventional chamber CEO. Yes, he championed the interests of his business members, but his life experiences allowed him to also be a vocal advocate on issues like homelessness, mental health and addictions. After John was diagnosed with cancer, he made it his mission to advocate for men’s health and prostate cancer awareness. With a few close friends, John formed the Garage Band, playing his favorite Beatles music, and raising $1.4 million for the Allan Blair Cancer Centre and cancer research. 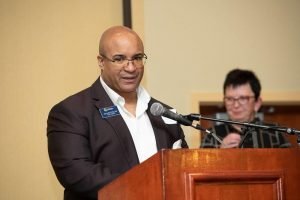 Within CCEC, John attended every single CCEC conference between 2002 and 2019, and he is certainly missed this year as we “come together” for the first time without John in the room.  He was selected as CCEC Executive of the Year in 2013. He co-chaired the 2016 conference in Regina. He was the President of CCEC in 2017. He started the CCEC Facebook Group that year and offered countless words of encouragement to chamber colleagues.

It is an honour to announce that John Hopkins, is being awarded, posthumously, CCEC’s highest award – the Council of Excellence –  a tribute to John’s legacy of leadership, mentorship and meritorious service over two decades in the chamber network.  In memory of John, and to commemorate this award, a donation has been made to the Allan Blair Cancer Centre.

Those in attendance responded to the presentation with an emotional standing ovation for John.

Collin Pullar, the past chair of the Regina & District Chamber of Commerce, represented the RDCC at the event. He paid tribute to John and his legacy while thanking the CCEC for its donation to the Allan Blair Cancer Society.

INFLATION IS HAVING A NEGATIVE IMPACT ON HOLIDAY SPENDING