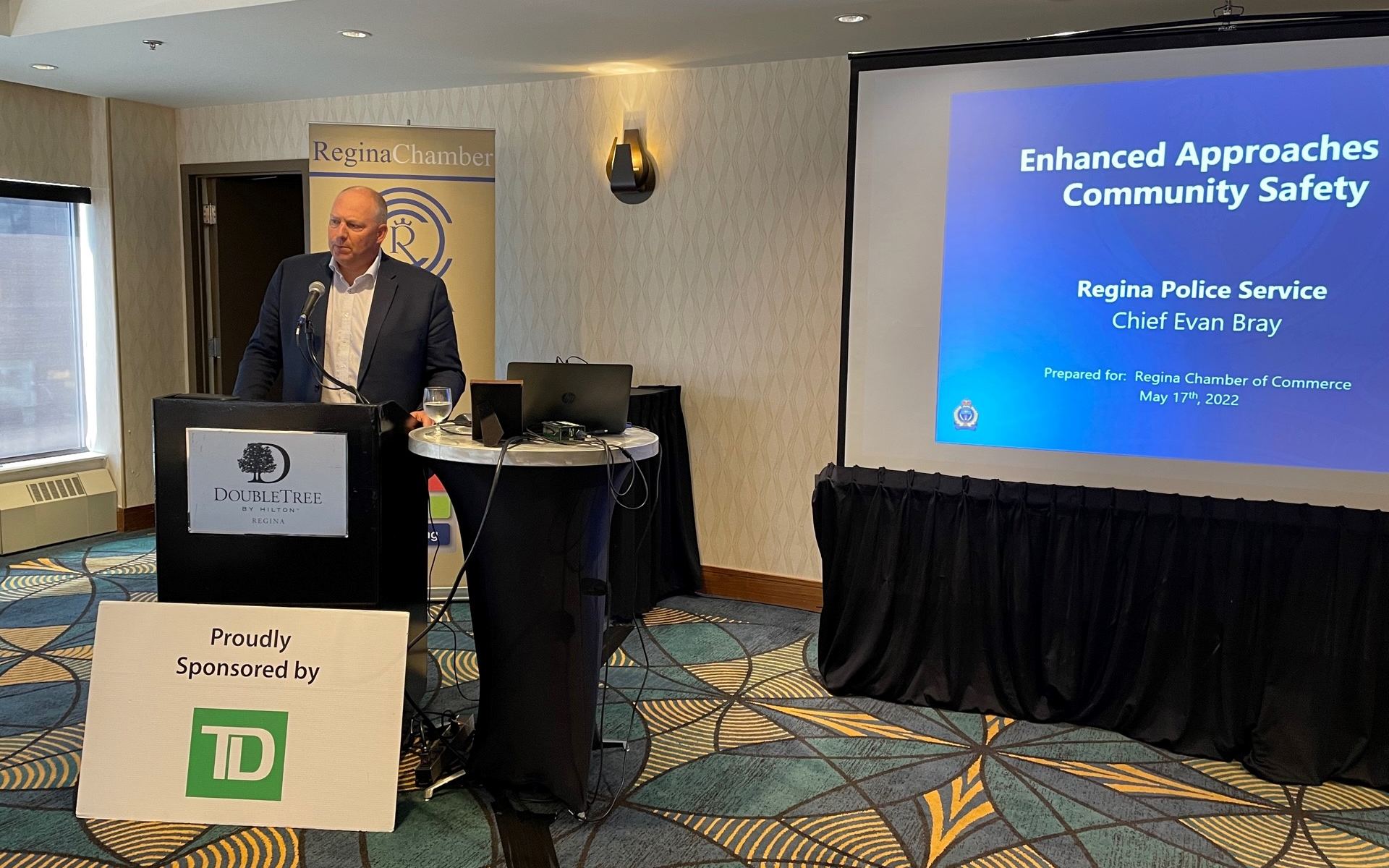 Evan Bray, chief of the Regina Police Service, took part Tuesday in the Chamber’s Luncheon Series and provided an interesting look at policing issues and strategies in the Queen City.

The presentation, entitled “Enhanced Approaches To Community Safety,” touched on a number of subjects with Chief Bray providing information and insight into the topics.

Here’s a quick look at a few of the topics Chief Bray discussed during his 40-minute presentation:

“The biggest problem in our community is drugs, without a doubt,” said Chief Bray.

He provided drug seizures statistics that were almost too shocking to comprehend. Methamphetamine seizures in 2014 totalled 395 grams. That figure rose to 19,229 grams in 2019 and, despite the impact of the pandemic over the past two years, the total amount seized in 2021 was 15,347 grams.

“Four-fifths of the calls that police go to in the City of Regina are not criminal in nature, four out of every five calls we go to are more to do with social challenges, mental health, addictions, social challenges of some sort,” said Chief Bray.

The RPS is developing partnerships and relationships in the community to help in this area. Chief Bray explained many times when officers get a call, there is an underlying issue that needs to be found and taken into account. These are cases that can’t solved with handcuffs or a detention centre.

By collecting and interpreting data, analysts have become an important part of policing.

“Now when the police officer gets a file, there’s been some analytics work done that helps direct them in the right direction. It doesn’t solve the case but if you’ve got to go up six steps on a ladder to complete an investigation, you’re starting from step two or step three, as opposed to step one,” said Chief Bray.

“The use of analysts is becoming more and more prevalent in policing and it’s been influential in the number of homicides. In the last four or five years we’ve been able to solve every single homicide that we’ve investigated.”

The RPS is in the process of adding a plane to its resources. A plane was selected instead of a helicopter, which has a much higher purchase price and operating costs while having a shorter ability to stay airborne.

While some have felt the plane is unnecessary, Bray spoke of the many benefits of having an aerial unit. With a long-range camera that can see both day and night, along with a detailed mapping system, the unit has the ability to zoom into targets up to 10 kilometres away. It will allow for dangerous pursuit scenarios to be successful dealt without any collisions, chases or use of force.

The aerial unit will also be used assisting in searches for missing children or compromised adults who are missing. Bray mentioned that five missing persons are reported daily to the RPS.

“In 2021, we had 181 violent offenses,” said Chief Bray. “Violent offenses are when someone is victimized, basically by someone using a firearm or some force was used or threatened with a firearm . . . Regina has one violent firearm offense every two days and more than three firearms offenses on a daily basis in our city.”

Many Reginans have expressed concern about handguns in the city but Bray said handguns are not the issue. Of the crimes committed with a firearm, only two per cent are with a handgun. The other 98 per cent are long barrelled guns, many which have been adapted to be used for criminal behaviour.

It’s National Police Week and Chief Bray’s presentation fit nicely into its theme of “Connected To Our Communities.” Police officers and first responders are often the gateway to many community supports which are vital to a connected and collaborative effort for public safety.

JASON DITTMANN INAUGURATED AS 137TH CHAIR OF THE CHAMBER

FHQ DEVELOPMENTS AND REGINA CHAMBER TO SIGN MEMORANDUM OF UNDERSTANDING